The heritage of Turckheim 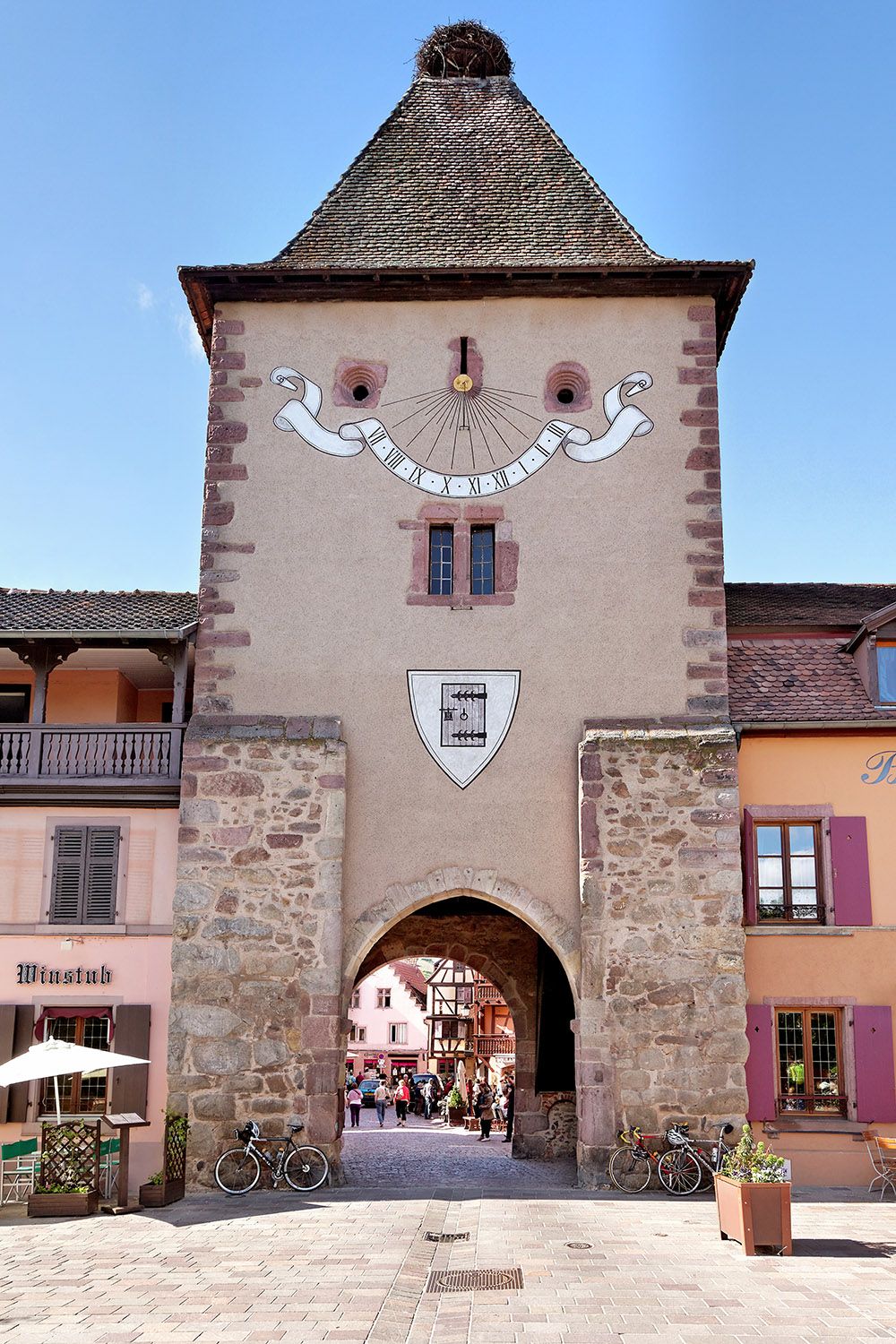 Originally, the Town Gate « France » was the gate for trading, mainly with Switzerland. The lower part dates back to 1330, and in the course of history, this gate has gone through a few changes. The Gate "France" successively bears the coat of arms of the Holy German Empire, of Louis XIV and was flanked with turrets in 1871, which were removed in 1912.

Originally, the Town Gate "France" was equipped with a drawbridge, a portcullis and of course two doors that were closed at night and during mass on Sundays. 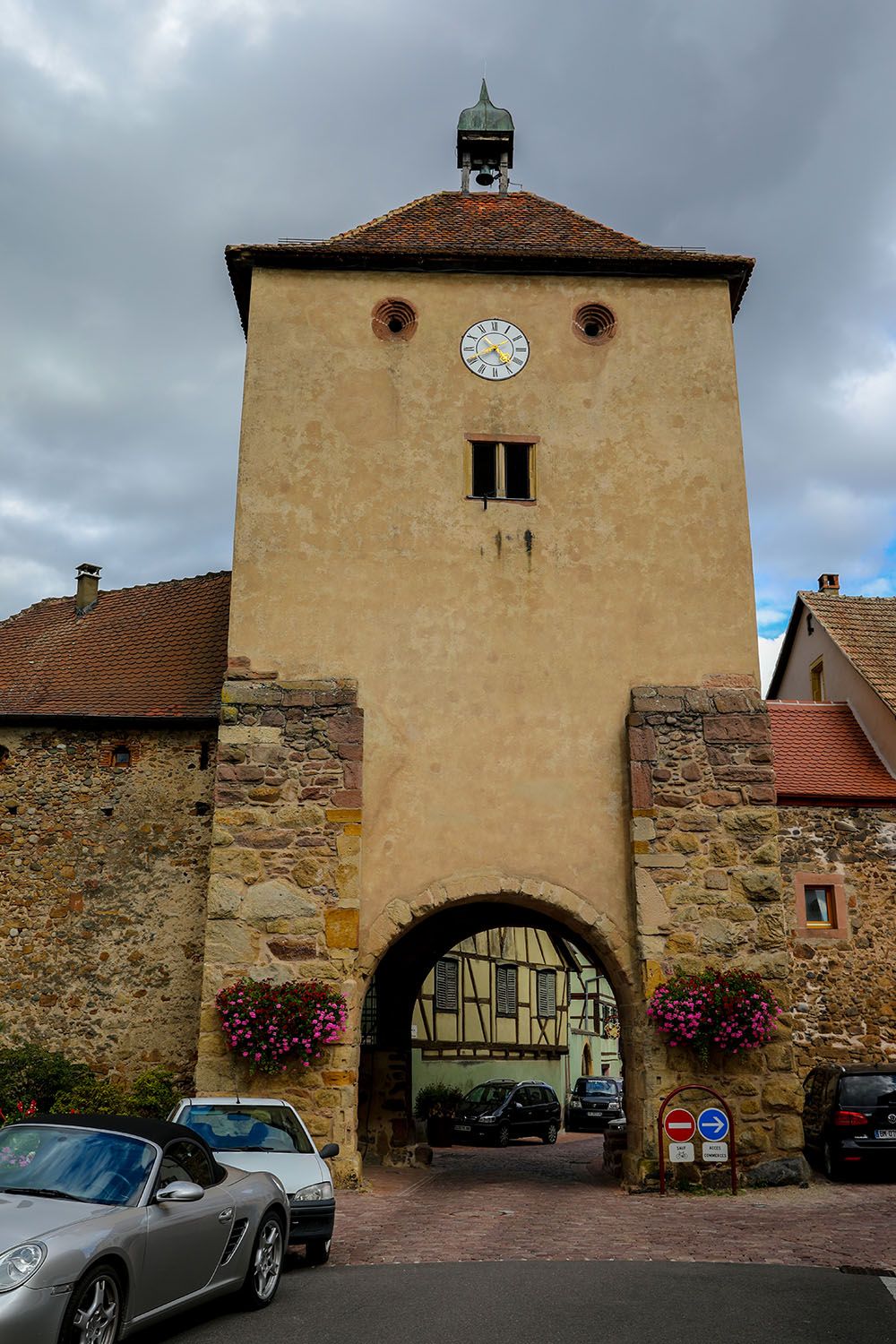 Built in the 14th century, the Town Gate « Munster » bears witness to the history of witchcraft : it is through that gate that the tortured witches were lead to a place named La Wann where they were burnt. Yet its windows decorated with scallops suggest a less murderous role : a stopover on the way to the St-Jacques-de-Compostelle pilgrimage.

The Town Gate "Munster" was also supposed to warn people of thunderstorms, as is shown by its still intact bell in the small belltower. 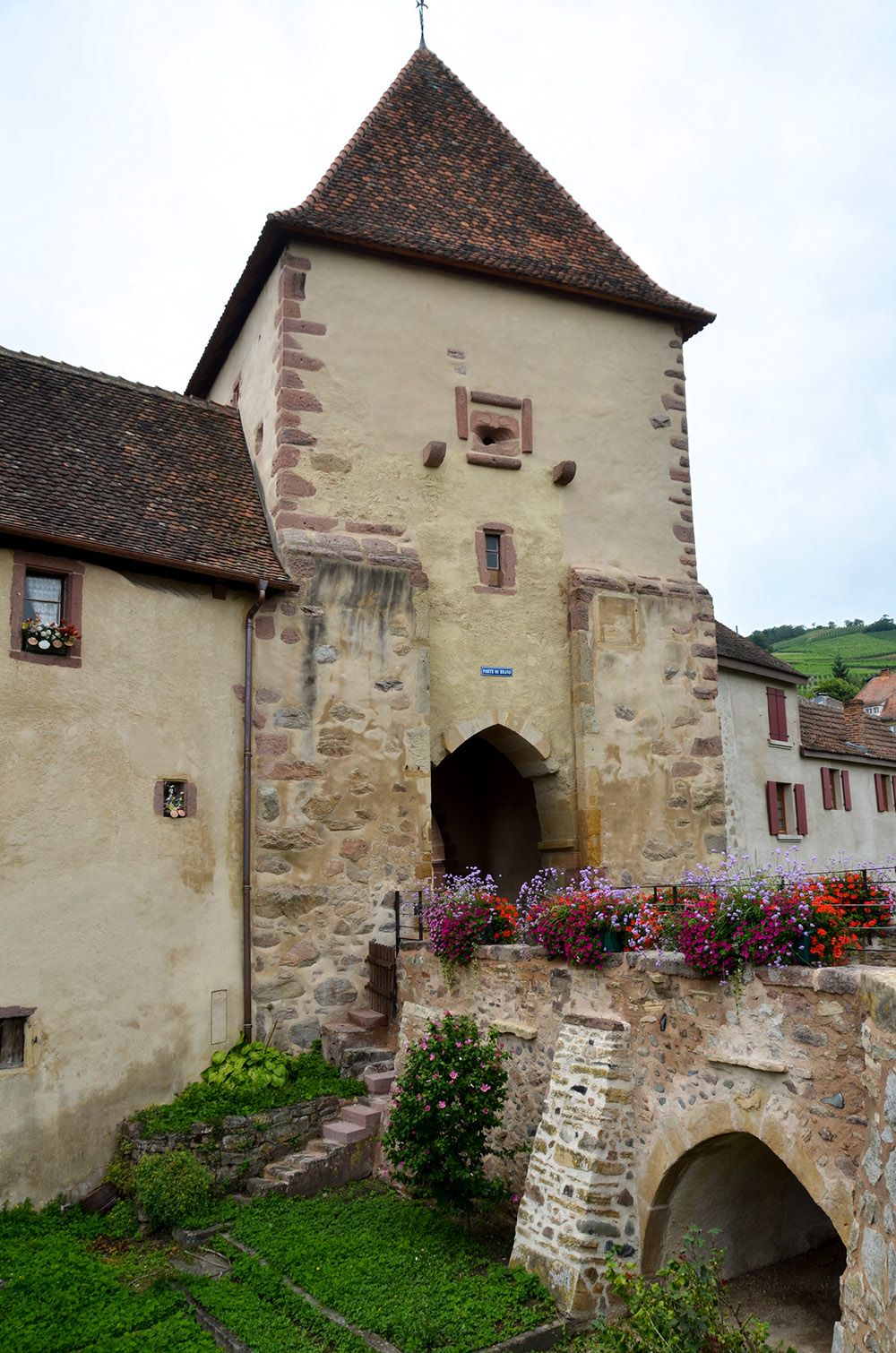 Among the three gates around Turckheim, the Town Gate « Brand » had the most defensive role, as shown by its massive and plain architecture, except for the gorgon aimed at keeping the inquisitive away, and mocking the enemy. The Town Gate "Brand" was provided with a portcullis, a drawbridge spanning a ditch and a double door that was carefully kept locked, except during the grape harvest season.

The Town Gate "Brand" was widely renovated in 1843, and provided with a weathercock, a work by J.-B. Hun. It was renovated again, inside and outside in 2006. 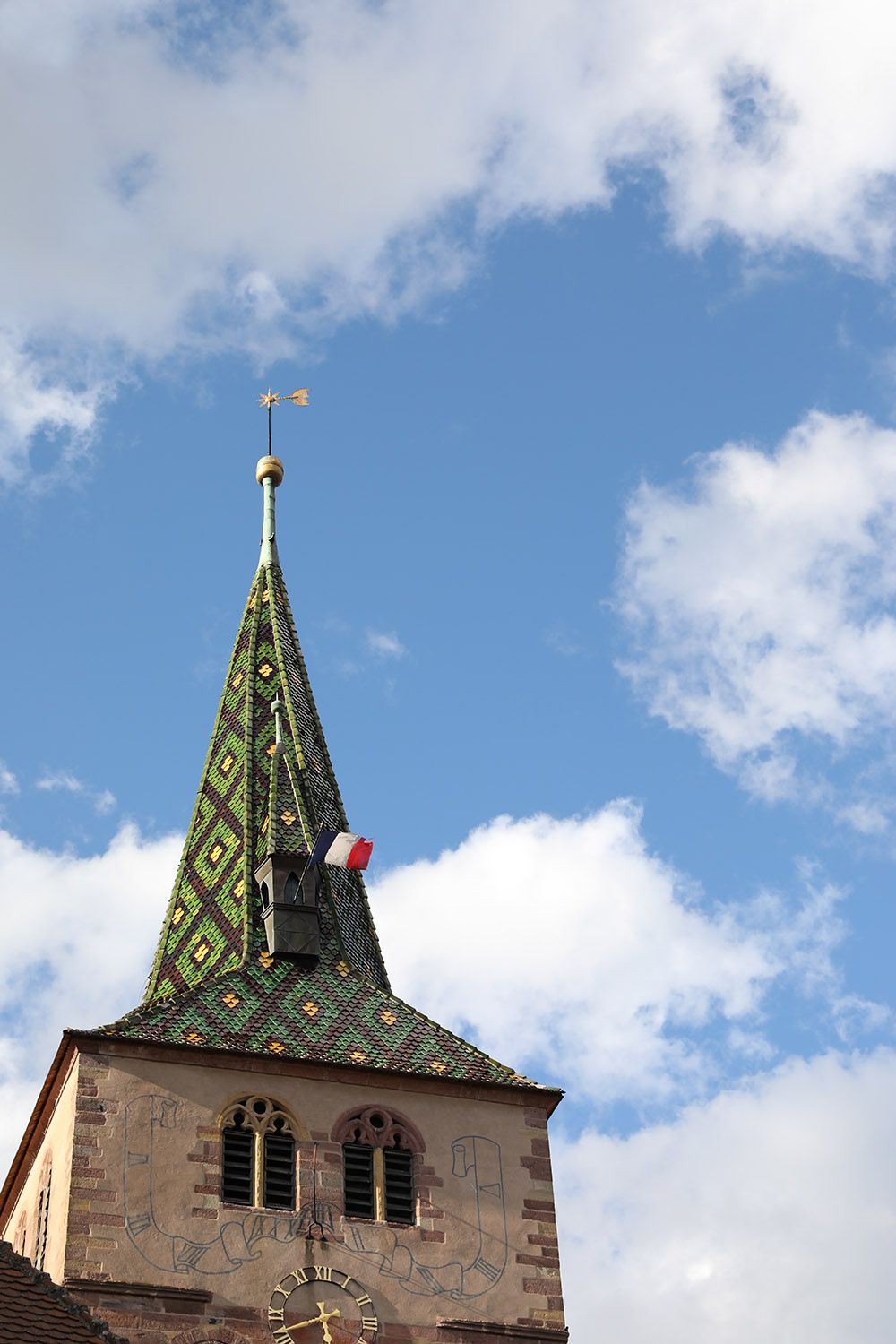 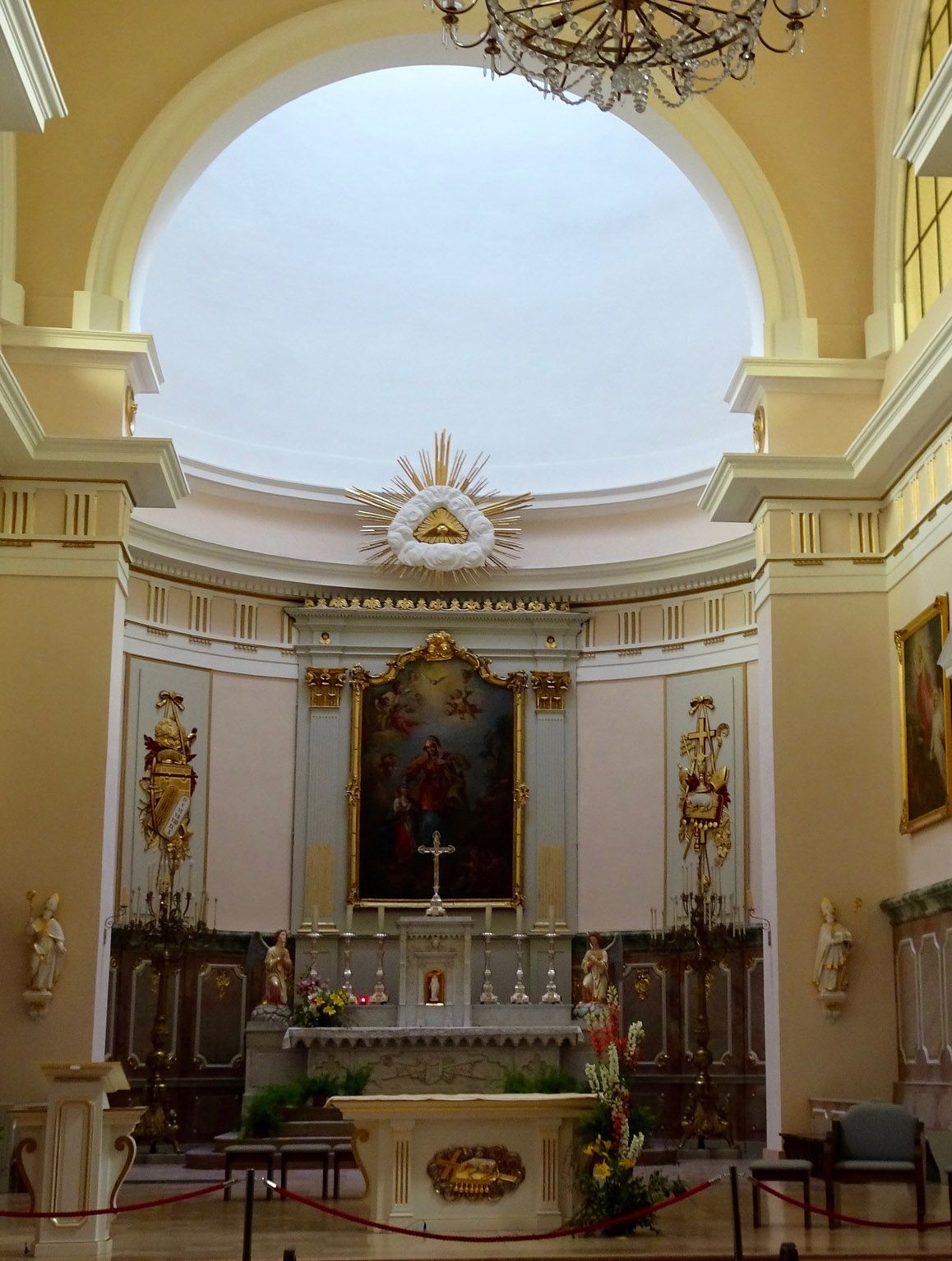 Last vestige of the Romanesque building. It has 5 levels. The base is 1190 and includes the Romanesque entrance door with the first span of the church that currently serves as Baptismal Chapel. Restored in 1983, it houses many statues from different periods such as Saint Anne, patron saint of the parish, Saint Urbain, patron saint of our vine growers, the Risen Christ, Saint Nicolas, Saint Barbara, Saint Margaret, Saint Richarde, Saint Arbogast, Saint Matern , a Calvary, the painting depicting Saint James the Compostelle pilgrimage, is now visible in the nave to the left of the choir ...
The bell tower houses 5 bells:
• Saint Anne: 1900 kg, 1958
• Holy Mary: 1330 kg, 1948
• Saint Odile: 975 kg, 1948
• Saint Joseph: 450 kg, 1920
• Bourdon “Christ Roi de l’univers”: 3300 kg, 2017
and the old mechanism of the clock; J. & A. Ungerer, 1907.

Choir and Nef were built in the 19th century in a neoclassical style to replace the old Romanesque church of which only the bell tower remains.
• The organ purchased as national property comes from the former Cistercian abbey of Pairis. It is a SILBERMANN organ built in 1755; when transferred to the Turckheim church, CALLINET enlarges the instrument by a new keyboard of the story. Following the fire of 1978 the instrument is restored by contributions of Alsatian organ builder Alfred KERN (1983).
• The paintings are signed mostly by Michel OSTER (1849).
• The stained glass windows are by Léon KEMPF after drawings by Robert GALL. Valentin JAEG (1955) sculpted the stations.
• The statues of Saint Matern and Saint Arbogast, bishops of Strasbourg.
• A Pieta from the 16th century. 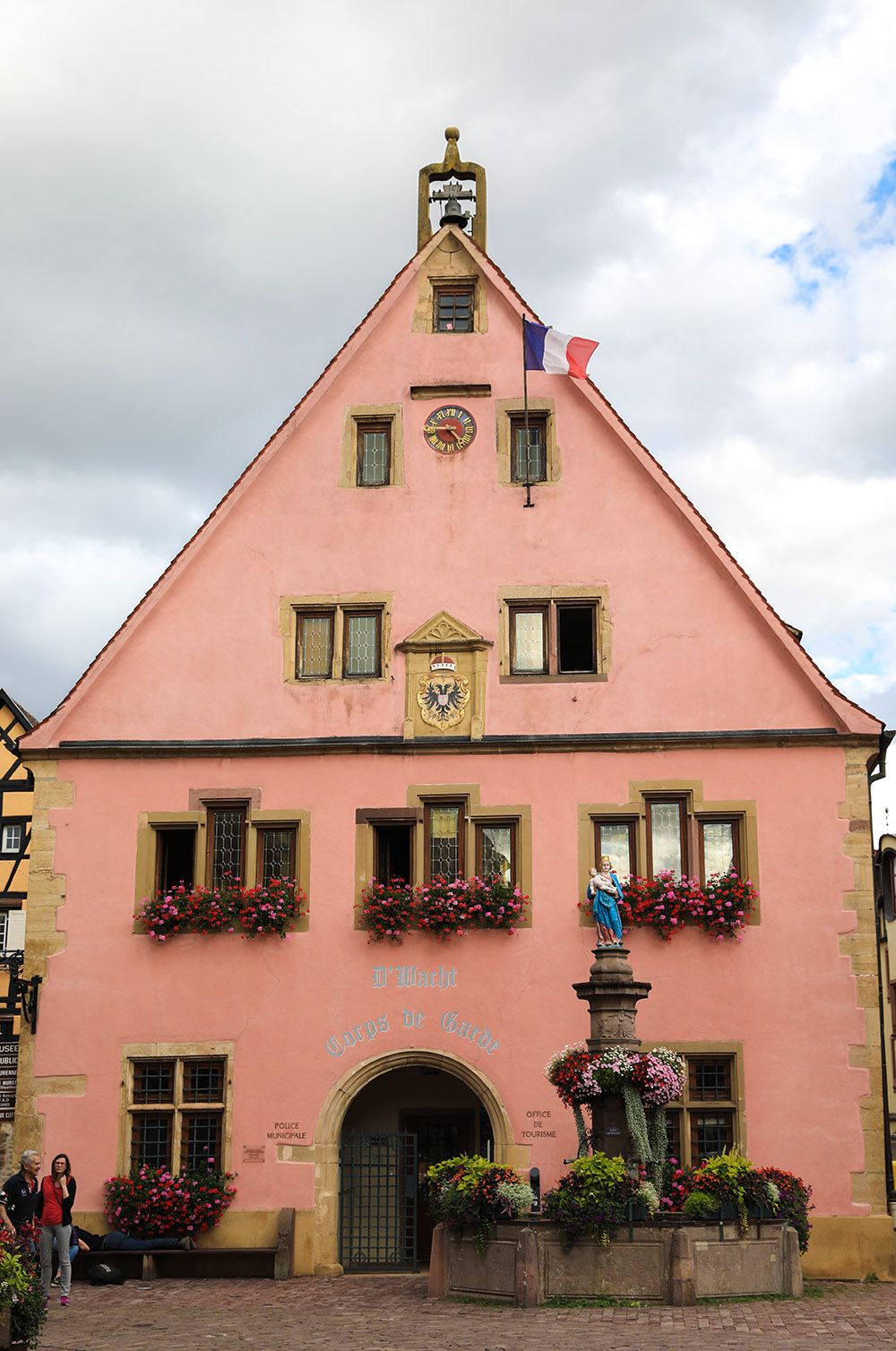 Originally, « Laube » (covered market), then « Herrenstube » (Townhall), the guardhouse was assigned to the guilds in 1575 who turned it into their "household". The history of the Guardhouse is eventful : it was used as an assembly-room and a "household", i.e. cooking ustensils and crockery, useful for the guilds' lives were stored there, but also objects for processions. Then it was turned into housing, then into a girls' school, the ground floor was even used as a butcher's stall. In 1970, it became the police station. An imperial eagle decorates the gable wall and the bell in the tower dates back to 1658.

Already mentioned in the townhall's rules in 1667, a fountain stands right in front of the guardhouse : it was forbidden to do washing and let animals drink. With a statue of Mary the Virgin with Child at the top, this fountain from the 18th century is the only water supply fed by a spring. 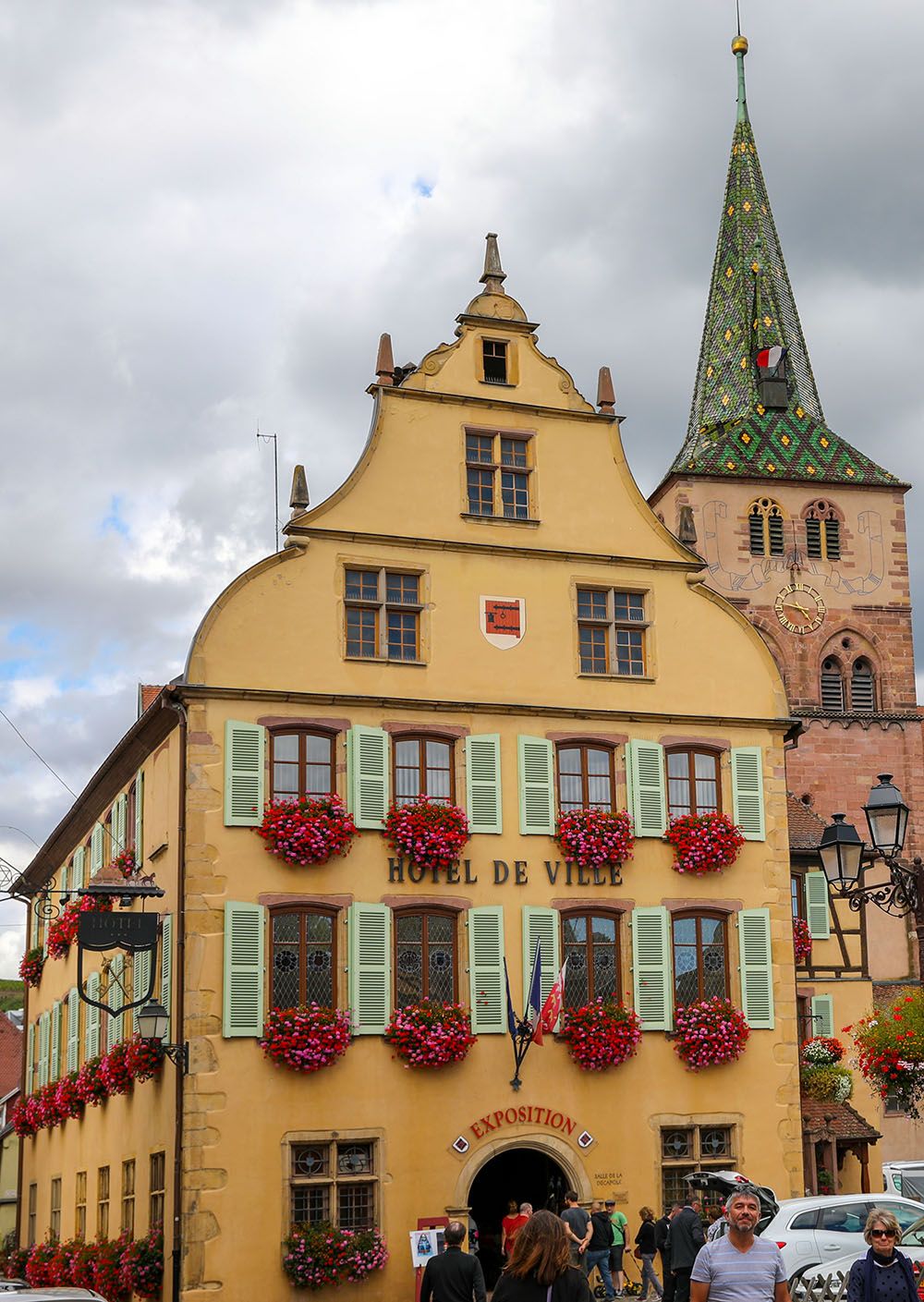 Built in the 17th century style, the townhall used to be the court of justice of the former imperial city. The cowshed and adjoining buildings were destroyed around 1860, the ground floor was long used as a ballroom ! When it was renovated, two Gothic walls and a Roman wall were discovered.

The former banister made of wrought iron was replaced by a balustrade made of sandstone from the Rouffach quarry.